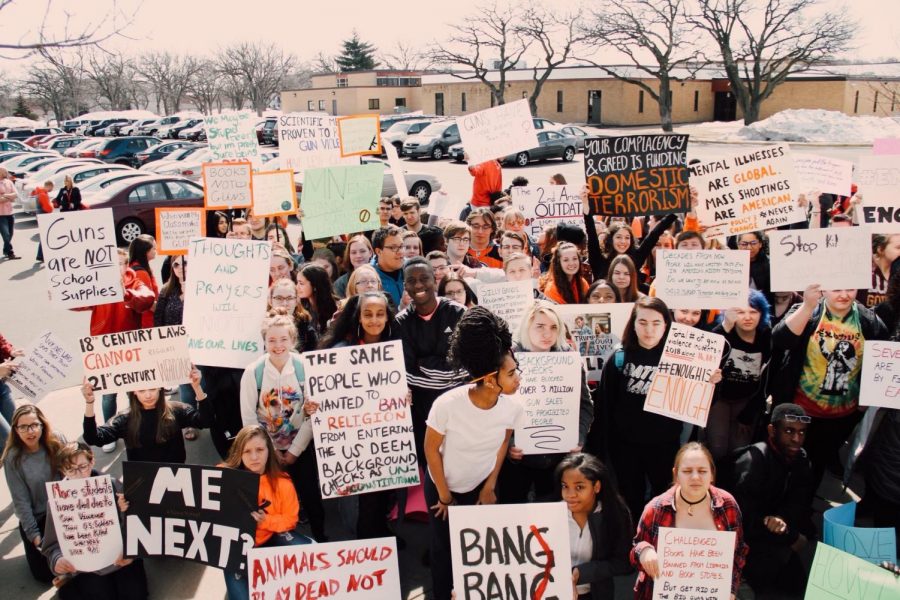 On April 20th, 2018, the nineteenth anniversary of Columbine, many students from Coon Rapids High School participated in a National Walkout. These students were protesting current gun laws and recent violence in schools, as well as honoring those who have died from gun violence.

The CRHS Walkout was organized by Kennedy Kehr, Frances Paygar, and Makeda Tadesse. The three took on this project because this particular issue weighed on their hearts.

“We never really talked about school shootings in school and that always bugged me. Once I saw the Parkland [Florida] shooting and that those students were standing up, I felt like we should bring it to our school,” said Kehr referring to why she personally felt moved and wanted to take initiative.

“You don’t have to wait for someone else to do it, so why not do it yourself,” said Tadesse.

The Walkout at Coon Rapids High School occurred from 10am to 11am. For the first six minutes and twenty seconds, the students were silent as they honored those who died in the Parkland shooting. Following that time, a few students shared their opinions on gun violence and how U.S. gun policy needs to change. Students were encouraged to register and vote whether they would be eighteen this year or in four years.

A few students mentioned the importance of community and how our student body needs to support one another every day. Other students brought up their concerns about their safety as well as the safety of their younger siblings in today’s world of mass shootings. The entire hour was filled with speakers, exceeding the expectations of the organizers.

“It was 100 times better than what we pictured it in our heads!” exclaimed Tadesse, happily reminiscing on the outcome of the walkout.

Although students were not certain on the best manner to limit gun violence, many ideas were brought up like prohibiting assault weapons and extensive background checks. It was a powerful and connecting moment for the students in attendance.

“I think it’s super cool! I love seeing the passion students have, and I’m glad they were voicing their opinions,” said English teacher, Matthew Severns. Severns was initially fearful that people would only walk out to get out of class and was pleasantly surprised that that was not the case.

Following the CRHS Walkout, many students felt moved to continue voicing their opinions at the Minnesota State Capitol. CRHS students, as well as students from multiple schools from all over Minnesota, sat on the steps of the Capitol building with signs and chanted in solidarity. Several concerned adults participated in the protest too.

Paygar was one of the MCs for the protest, and Tadesse was one of the eighteen student speakers at the Capitol. The speakers touched on how important it is for the younger generation to continue voicing their opinion, even after older political figures try to silence them. Also, some speakers spoke about minority shootings and how people of color are often victims in gun violence.

In addition to the students who gave their speeches, two poets read their pieces for the crowd and a Minnesota rapper performed two original songs. After the performance, the students restarted the chants.

Many students concluded the event by networking with each other for future events.