Marching Band: The Greatest Comeback Ever 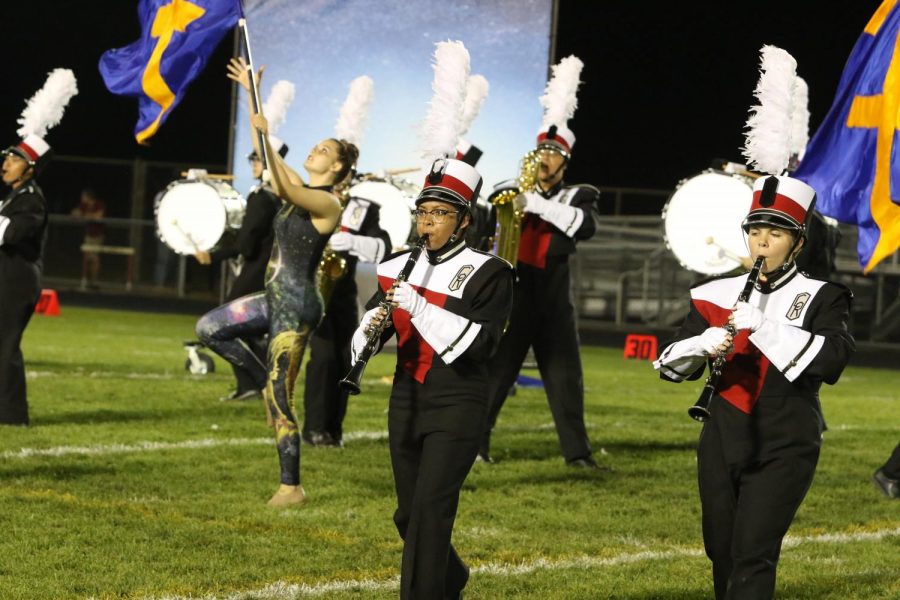 This Marching Band season has been a rough one, to say the least, but it does have a glorious twist at the end.

The season started in August with 3-hour-long  rehearsals, two to three times a week. Then came a one week band camp, where rehearsals lasted from 8am-3pm Monday through Friday. Once school started the Marching Band met during 5th hour and sometimes after school to practice.

This year the theme of their show was called “Zodiac.” There had definitely been some changes, with the addition of Ryan Palmer as the new band director, as well as an increased number of students participating in Marching Band. One of the challenges for Palmer was filling the shoes of former director, Brian Duffy. This proved to be a task easily handled by Palmer. Senior Tanner Isaacs summed it up for many, saying, “I really like Palmer; he is great. He has a great personality and a sense of humor, and he also takes music seriously and wants us to be as good as possible. He is also willing to challenge his students and help them along in any way he can.” And it was indeed a challenge.

The year got off to a rocky start, with the Marching Band placing last in their first competition at East View High School. A week later they had another competition, at Cumberland High School, and placed 2nd out of four bands. After that, they continued to place last in competitions at Irondale, Anoka, and Champlin Park. But the weekend of October 14th, things were different. They competed in the Youth in Music State Finals at US Bank Stadium. All of their hard work and persistence finally paid off. Out of nine bands in Class A, they placed 3rd and brought home some hardware for the cabinet near the band room.

Let’s hope it’s the start of a new tradition here for the CRHS band program.